Blogging 101: Nothing Much Going On Again

I’m reading some books I really like. By authors I’ve never heard of.

It will be published soon, I guess. By me or someone else.

Summer is very hot in New York and I don’t really love the park in the summer so I spend most of my time inside. I don’t use an air-conditioner because it’s loud (and the energy is expensive). So it’s always hot inside.

My neighbor above is loud. I know he’s a fool and probably a sociopath. I’ve had words with him about it but he thinks he’s entitled because this is New York and the city is loud. That’s mostly true.

Maybe I need to find a new town. I’d like to stay in New York but I’m afraid it’s not for me anymore. It is loud. And it’s fake. And everyone is so self-aware you can’t walk done the street without someone drilling your eyes, trying to figure out what your wearing and why you’re wearing it. I used to walk down the street oblivious. Now I feel trapped, like I’m being interviewed.

I’m a writer in New York City. That’s cliché. I should be a writer in Bethlehem, Pennsylvania. Even Cleveland would be better. I guess I should’ve figured this out years ago but it’s not so bad I figured it out now.

There are a lot of great minds in New York. I’m confident I’m not one of them.

The books I’m reading are called fiction, and I’m sure they are, though they capture some form of reality. I think that’s important to understand. There is not one reality. There are several realities.

Some people can write things down exactly the way they happened. But they leave out the nonsense. That’s what makes it good.

History is not a certain reality.

Some people say New York City used to be shitty. Other people say it used be the shit.

Here is a picture of me with nothing much going on: 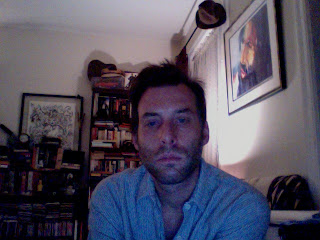 I used the camera on my computer to take that picture. I make funny faces when I write and I often worry someone is watching me through the camera on the computer.

The rivers around Manhattan are starting to feel like the Pacific around Alcatraz. Manhattan would make a great prison. Perhaps it is a prison. If I didn’t know what a prison was like I would say something like, “Sometimes it feels like a prison.”

Several other states are doing the same.

Maybe I should blog about it.

Is it too late to take back everything I said?- TSP