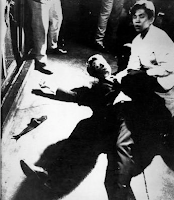 “I am painfully aware that the criticism directed at me in recent months involves far more than disagreements with my positions. It involves the disappointment of friends and many others who rely on me to fight the good fight. To them I say, I recognize my own shortcomings — the faults in the conduct of my private life. I realize that I alone am responsible for them, and I am the one who must confront them." – Ted Kennedy, 1991

In 1962 Ted Kennedy was awarded a seat in the US Senate as a Northern Yankee. His progressive ideas were unappealing and unacceptable to the older, less sophisticated Southern members of the senate. The good ole boys running things in the Bible belt liked separate water fountains for blacks and whites. Cecil Price– the deputy sheriff of Neshoba County, Mississippi, responsible for the execution of three civil rights workers a few years later in 1964– was the kind of young man the south might rather lynch black folk with. No, I mean, read the Lord’s Good Book with. It was during these days in the early sixties the South gave plenty of warning to the North: Lay off our constitution and keep off our state's rights. Or else.

In 1961 Ted’s brother John F. Kennedy became president. His domestic policy promised federal funding for education, medical care for the elderly and an end to racial segregation. Even though the Supreme Court ruled in Brown v. Board of Ed in 1955 an end to racial segregation in schools, most southern states didn’t bother to listen. So, segregation in schools, bathrooms, restaurants, movie theaters and most public places stayed the same. When Governor Wallace tried to stop black students from entering the University of Alabama, President John Kennedy sent federal marshals, the National Guard and the attorney general to clear things up. Ain’t that cool? Not for long. In November 1963 the south reared its ugly head when Louisiana’s Italian boys from the bayou did a favor for the mafia in Cuba and the Ku Klux Klan. That day around noon a bullet ripped through President John F. Kennedy’s head and splattered liberal brains all over the trunk of the convertible he was riding in. Ted Kennedy went home to Hyannis Port, Massachusetts and told his sick father the bad news. That sounds hard. Maybe drive a man to drink.

The south won that battle but the following year turned out to be quite a bash. Lyndon Johnson passed the Civil Rights act of 1964, which outlawed segregation in schools (again), public places and employment. This was a blow to the south. Segregation was their thing after all. Without it what were they? Ted Kennedy’s last name at this time was both a blessing and a curse. People wanted his head on a stick. His ears in a jar. His balls between a vice. Soon a plane Ted was traveling in crashed into an apple orchard in Southhampton, Massachusetts. The pilot and an aide were killed. Ted was dragged away from the burning pile of metal by Birch E. Bayh, a fellow liberal senator. He spent months in the hospital with broken ribs, a twisted back, punctured lung and internal bleeding. The experience inspired Ted’s career long passion for health care. Still, going down in a plane had an effect on his brain, like it will on most. It’s a very traumatic event. Some respond differently to the stress. Teddy drank. Millions of people wanted him dead.

In 1968 Ted Kennedy realized the war in Vietnam was a huge mistake. He announced publicly if South Vietnam didn’t shape up the US should ship out. Meanwhile, Robert Kennedy was campaigning in the Democratic primaries for president. One of his opponents was George C. Wallace, the racist Governor from Alabama. Robert’s primary victory in California sealed the deal for his Democratic nomination. In Los Angeles, later that night, Sir Han Sir Han plugged a twenty-two in Robert’s head. Ted was in San Francisco. The journalist Frank Mankiewicz said about Ted, “I have never, ever, nor do I expect ever, to see a face more in grief."

Chappaquiddick Martha’s Vineyard 1969. Six guys six girls. One girl needs a ride home so one guy tells his chauffer to hand over the keys. The details of what happened next are not something I can defend. These details lead me to believe that what Ted Kennedy did that night and what he said he did are two different things. Some details are agreed upon: a car wandered down a dark road; it drove off a bridge and into the channel below; the girl inside didn’t make it; some fisherman found the car in the morning; inside was her body. Other details vary. Some sound possible, but not plausible. That was thirty years ago. The things that occurred during the six years leading up to Chappaquiddick would do great harm to any man. Some men deal differently. Teddy drank.

teddy was a murderer