By Brian Wask
Even stupid people know how to make signs. 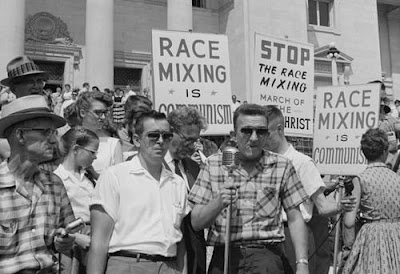 Then… they were wrong. They felt like they were right. They lost that battle too. And the guy holding the microphone looks like he’s going to lick it. He might be dead today but I'm sure he had a few kids with his daughter. Hopefully those kids didn't grow up to be anything like their pappy. 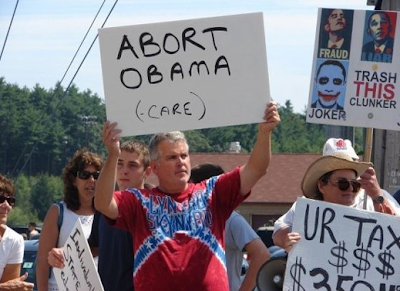 Now... I don’t know this guy but by the looks he’s not the brightest light in the chandelier. In fact it looks like this one’s burned out. His t-shirt says it all. That flag don't fly so well anymore pal. But you keep it alive cause something you ate made you stupid. Abort Obama? What the...? You lost the Civil War, you lost race mixing, and you’ll lose healthcare reform. What values? I challenge him to name one thing the South can be proud of. Sweet Home Alabama? What an idiot. Wait 'til we legalize gay marriage. You're gonna love this place. Freedom. That’s about it. 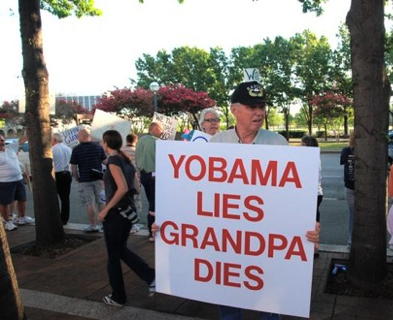 Yeah, right old man, time for you to die. You're not doing much good here anyway. Thanks for coming out. Try not to fall on the way home and break your hip. Don't want your insurance to drop you like the load of crap it's safe to assume comes out of your mouth whenever you open it. YOBAMA? He's got more class than you've ever had. I promise I'll only take away your guns so I can shoot you with them. "For War! Against Healthcare! For War! Against Healthcare!" 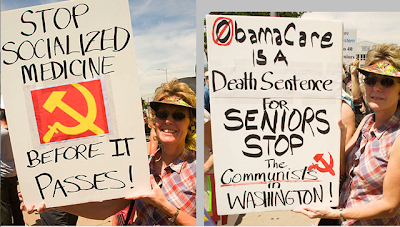 They must be twins. Both idiots too. That must be her daddy licking the microphone above. I could think of a few things I’d like to do to her with a hammer and sickle. That’s right, I get mad sometimes. The "commies" in Washington want to take over healthcare so they can give it to people who need it. But you can't understand that cause your head aint on straight. I got your death sentence right here. It includes a week old port-a-potty and ten thousand angry hornets. We'll put you inside and listen to your screams. Oh, that's mean. Lucky for you the government will pick up your hospital tab. Doesn't that sound nice?
The End
10/14/2009